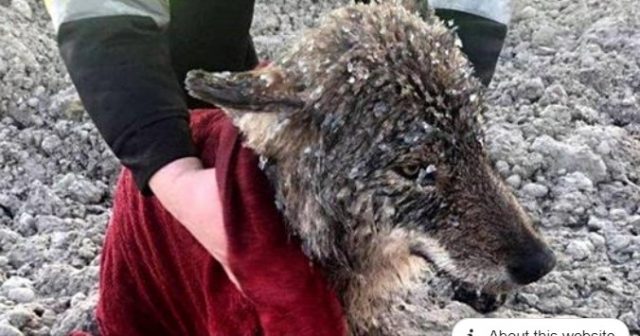 Rescuing any animal from freezing water is dangerous, but especially when the animal is wild.

A team of Estonian dam workers spotted an animal struggling to stay above water in the nearly frozen Parnu River. The men immediately headed to the river to help save the animal. Ice was covering most of the river and needed to be chipped away. When the men got closer to the animal they thought it was a dog.

Finally, the men were able to clear a path and reach the shivering dog. They pulled the frozen animal to shore and wrapped him in a blanket. The men placed the dog in their vehicle and headed to the local clinic. On the way to the clinic, the men commented on how affectionate the dog was and it even cuddled in the lap of one of the men. They did not think anything of it and just thought the dog was thanking them for their help.

The men were surprised when the vet told them that they actually rescued a wolf. The vet noticed that the animal’s blood pressure was extremely low, which could explain why the wolf was so docile. A local hunter confirmed that the animal was a wolf. The wolf turned out to be a young male about a year old. He was exhausted and hypothermic when he arrived at the clinic and needed treatment.

For everyone’s safety, they placed the wolf in a crate and continued his care. The wolf recovered completely and was released back into the wild with a tracking collar.

The Estonian Union for the Protection of Animals (EUPA) paid for the wolf’s treatment and said, “luckily, everything turned out well”. EUPA also issued a statement thanking the rescuers, “We are so happy for the outcome of the story, and wish to thank all the participants – especially these men who rescued the wolf and the doctors of the clinic who were not afraid to treat and nurture the wild animal.”

Puppy Fascinated By ‘The Lion King’ Gets So Emotional When Mufasa Dies In Front...

Never Drink Coffee Between 8AM And 9AM