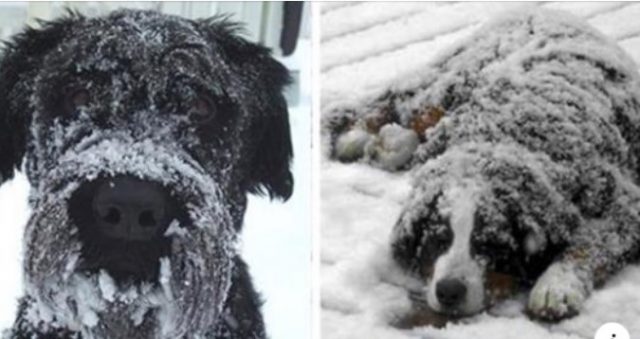 Some parts of America were colder than some of the coldest places on the planet, like Antarctica and Iceland. In fact, even people familiar with the frigid conditions in Antarctica were shocked by the cold snap being experienced in America.

With the wind chill factored in, temperatures were plummeting to negative 30 degrees or colder.

And in these nightmarish temperatures, some animals were being left to fend for themselves.

There were people who were leaving their pets alone outside in Chicago, when even a “normal” Chicago winter is typically much too harsh for a dog to endure outside for a long period of time.

For the pet owners that police have already rounded up, they’ll face hefty fines and even potential jail time for their actions.

New ordinances have passed in recent years, and so now police officers have recourse when it comes to holding these pet owners accountable.

Since they’ve gone into effect, these ordinances have already saved the lives of many area dogs, according to the South Suburban Humane Society. That’s because law enforcement officials have the right tools and knowledge at their disposal now to help the poor dogs who have been left outdoors. And if pet owners don’t comply, they could be subjected to powerful penalties.

Dr. Pryor was very pleased that he enjoyed some wet canned food this am.

It definitely takes a village to help dogs that are being treated poorly. A big thank you to our law enforcement as well as the people who fought for these laws to take effect. They are saving lives.

To learn more about what is going on, take a look at the CBS Chicago clip below.

WEIGHT LOSS: Discover How To Remove Sagging From Your Body Using a Mixture Of...

Signs of water retention and 6 home remedies that help

This Is A Regular Hotel. But When The Clock Strikes 11 PM, The Coolest...