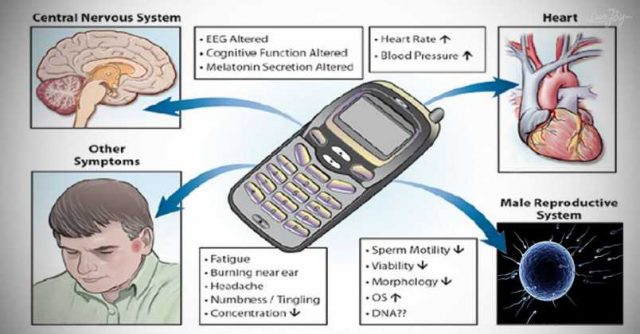 The cell phone or smartphone industry is the largest growing industry today. Every other day the industry comes up with new, advanced cell phone models and most of us are tempted to buy them.

Besides the fact that cell phones help in easy communication, did you know that there may be a possibility that it is adversely affecting your health?

A few national and international health authorities, including the World Health Organization (WHO), have stated that there is no established scientific evidence that the use of cell phones causes any health effects. However, the possibility of harm cannot be completely ruled out.

The National Cancer Institute claims that there are three reasons why people are concerned that cell phones may pose a threat to health.

What is radiofrequency (RF) energy?

Ionizing radiations include X-rays, radon, and cosmic rays. Exposure to these rays like X-rays is known to increase the risk of cancer.2

The only consistently recognized effect of RF energy is heating.3

How Are People Exposed?

Cell phones work by sending signals to (and receiving from) nearby base stations using RF waves. The RF waves in a cell phone come from its antenna. The waves are strongest at the antenna and quickly lose energy as they travel away from it.

The cell phones are usually pressed against the side of the head when we use them. Those body tissues closest to the phone absorb more energy than the other parts.

The following factors affect the amount of RF energy a person is exposed to.4

Most of us believe that the use of cell phones may increase the risk of cancer. However, there is no consistent scientific evidence that supports this belief. As mentioned earlier, tissue heating is the only consistent effect of cell phone use.

At the frequencies the cell phones use, the heating is absorbed by the skin or superficial tissues, resulting in insignificant temperature rise in the brain or any other organ.

The U.S. Food and Drug Administration also claims that there is no substantial evidence that links cell phone use to cancer and hence we cannot arrive at any conclusion unless further research is undertaken.

Cell phones are home to germs if we use them when our hands are dirty. A research has found that one in six cell phones is contaminated with some sort of fecal matter, probably because their owners did not wash their hands with soap after using the toilet. Some of the phones were found to harbor E. coli bacteria from fecal origin. If ingested into the body, E. coli can cause fever, vomiting, and diarrhea.

Another study found the presence of methicillin-resistant Staphylococcus aureus (MRSA) on the cell phones. Staph infections can turn into deep, painful abscesses.

From these studies we can conclude that we must keep our hands clean at all times. If our hands are dirty the same will be passed to the objects we touch.

Each day in the United States, over 8 people are killed and 1,161 injured in crashes that are reported to involve a distracted driver.

Small screen and bright light can the strain eyes. The eyes use more muscles to adjust to the different lighting in and around the screen. This is when you feel your eyes are hurting. Those using cell phones may also have a habit of holding them too close to the eyes, which also add to eyestrain.

Keeping adequate distance between your eyes and the cell phone and increasing the font may help reduce eyestrain. Also, use the 20-20-20 rule. Take a 20-second break from your cell phone every 20 minutes and focus on something at least 20 feet away.

Prevention is better than cure, so let’s get into the habit of avoiding cell phones when wired telephones are available, texting instead of making a voice call, limiting the duration of calls, and making calls where reception is good.

Drink This At 7pm On The Night Before Bed, To Throw Like Crazy At...

She Needed Money To Feed Her Kids, So She Went To Sell Her Ring,...